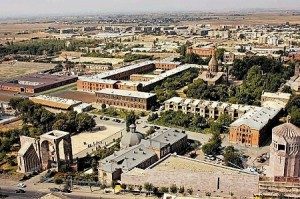 The total area is 4328.83 hectares, and it is the largest city in the province and the 4th city of the republic.

The city had a powerful industrial infrastructure, which no longer exists.

The settlement was founded in VI century B.C. by Vardges-Manuk, the son-in-law of the Armenian King Yervand A. Sakavakyats; he built Vardgesavan on the site near Shresh Hill and Artemid town. The city was entirely rebuilt and fenced by King Vagharsh I. He also renamed it after him and made the second city of throne residence. Since the beginning of the IV century, it was the town (non-permanent) where the Great Armenian Catholicos resided. Vagharshapat was also called the New City (Kainepolis), the Mother town (the Capital), etc.

In 301-302, the Mother Cathedral of St. Etchmiadzin was founded as the First Christian Cathedral in Armenia. At the beginning of the fifth century, a school was established there and in 1771 a printing house was built (the first one in Armenia). Since May 1441, the Armenian Catholicosate has been re-established in Vagharshapat, where it’s still located. Vagharshapat is the spiritual capital of all Armenians with Mother Cathedral of St. Etchmiadzin.

Vagharshapat has 14 public schools, 2 musical and art schools, children’s creative and state preschool centers, “Grigor Lusavorich” University, Charles Aznavour Dramatic Theater, Mother Cathedral of St. Etchmiadzin’s Gevorgyan spiritual Academy (the only spiritual academy in the country) (founded in 1884, has been functioning as a spiritual academy since 1996), HAP Branch, Khoren Ter-Harutyun’s Gallery, Arshil Goru’s and Manuk Abeghyan’s museums, Hovhannes Hovhannisyan’s House Museum (since 1948), a club, a hospital, etc. The monument of Komitas is also located there (1969, sculptor – Yervand Kochar), as well as Makar Ekmalian’s sculpture (2008, sculptor – Levon Tokmajyan). There are many khachkars in the city, placed in several monasteries and churches. 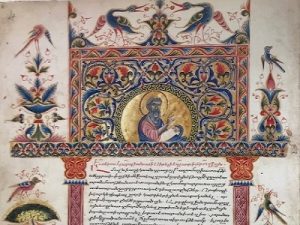 The guests of “Kanch” International Music Festival are known

The young participants of the “KANCH” festival are known